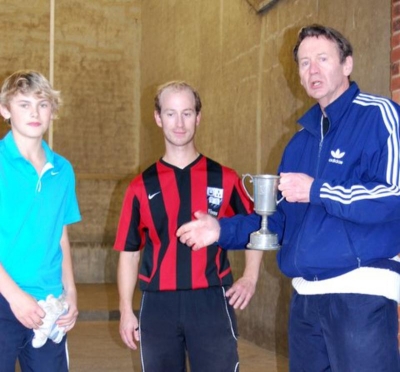 The 2010 Ipswich Tournament for the Graves Cup finally took place on the 16th/17th October, a mere 10 months later than scheduled and thankfully unaffected by severe weather conditions this time round.

A healthy turnout of 18 pairs of assorted Ipswichians and guests enjoyed an excellent weekend's Fives, organised as efficiently as always by the evergreen Peter Boughton, with the main talking point being the exciting group of talented young players coming through the U13, U14 and U15 ranks at Ipswich School. I think it is safe to say that the school has never had such an exceptional crop of talented players coming through in the 100+ years of its Fives history, a fact readily confirmed by the only man present over the weekend whose memory covers that whole period, OI Fives Club President Mike Fenn.

The weekend started early for the youngsters with a Friday evening coaching masterclass from Olavian Fives legend Seb Cooley. So awestruck were the schoolboys by Seb's Fives superstar status that a glove-signing session followed on from the coaching. Seb's agent has aked me to point out that he is available at a very reasonable rate for personal appearances at functions, weddings and bar mitzvahs and that a range of Seb Cooley autographed merchandise and memorabilia will soon be available to cash in on his new-found celebrity. Rumours of an appearance in the 2011 series of "Strictly Come Dancing" are not to be discounted either as the BBC is apparently already looking for the next Ann Widdecombe.

Despite tournament regulars feeling slightly disconcerted by playing in something other than sub-zero January temperatures, the weekend soon settled into its familiar routine. The Saturday Fives on Ipswich's three courts was non-stop from 10am until 6pm with four groups battling it out for places in the Sunday morning quarter-finals, whilst those unable to find an available court battled it out to be first to sample this year's award-winning Scholey brew, with competition fierce on both fronts. The Saturday evening dinner in the pavilion lived up to its reputation, featuring as it did the traditional foot in mouth speech by the Club President, warm congratulations for Peter Boughton on his forthcoming 60th birthday, Oli Watts being the model of restraint as ever and the consumption of entirely moderate and appropriate amounts of port until about 4am, at which point the pavilion floor beckoned to those still left behind (I was going to say still standing but then thought better of it) to be followed by a 10am trip to the Greyhound for a Sunday morning fry-up.

As always, the Sunday morning form book has a lot more to do with the Saturday's off court proceedings than with anything that may have happened on court earlier in the day. The quarter-finals saw wins for Seb Cooley & Cameron Lyle, Gareth Hoskins & Tom Martin, Alex Yusaf & Pete Baxter and Pete Scholey & Isaac Wagland. Seb and Cameron then continued their impressive form in the semi-finals with a comfortable win over Alex and Pete, whilst the other semi-final produced the closest match of the tournament. It seemed very straightforward to start with as Pete and Isaac cruised through the first game 12-3 and then made it to 11-7 and match point in the second. Opponents Gareth Hoskins and Tom Martin weren't beaten, however, and rode their luck whilst gradually edging back to 11-11. Again Pete and Isaac reached game ball first but again were unable to land the killer blow and Gareth and Tom nicked the game 14-13. The third game saw the two young Under 14s play to a standard that produced gasps of admiration from the watching crowd and plenty of perspiration on the brows of Gareth and Pete. Eventually, though, Gareth and Tom completed their comeback to take the decider 12-8. Their reward was a 10 minute break followed by a best of five final against Seb and Cameron.

With Cooley warming up by signing autographs for his adoring East Anglian public, Gareth and Tom felt they had a chance if he let the fame go to his head and remained distracted. Once on court, however, Seb and Cameron were simply too strong and won 12-7, 12-8, 12-7 to take the title. The Plate continued well beyond the conclusion of the main competition, with Tim Wyndham and Tony Stubbs finally emerging triumphant. At this point the biggest shock of the tournament became apparent: John Caudle had failed to win anything! To experienced onlookers, the fact that he wasn't actually playing this year did not in any way make this feat any less surprising. Hips permitting we expect normal JAC service to be resumed when the 2011 edition of the Graves Cup takes place in January.