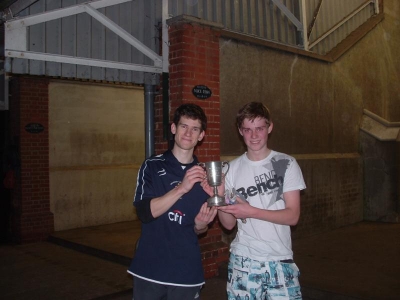 The 2013 Ipswich Tournament for the Graves Cup took place at the weekend with the usual assortment of OIs, current Ipswichians and random interlopers convening on the most easterly set of courts in the country for the annual feast of eating, drinking and sleeping on the pavilion floor with a bit of Fives thrown in for good measure (at all times of the day and night). The final was an all-Ipswichian affair with two evenly matched OI/schoolboy partnerships battling it out, Tim Fletcher and Sam Clarke eventually winning 3-1 against Steve Burnell and James Gray.

The first ever Ipswich Tournament took place in 1979 and was won by Peter Boughton and John Levick. Noteworthy in the 2013 edition of the tournament, therefore, was the appearance in the draw of the aforementioned Boughton and Levick, only this time alongside both of their sons. With the other (very) senior pros of OI Fives unavailable or reduced to a spectating role it was left to the likes of Steve Burnell and Gareth Hoskins to provide the OI experience along with the returning prodigal son of Ipswichian Fives Bob Freeman, back for his first outing in a decade.

Bob's initial dismay at being drawn to partner an Under 15 schoolboy was soon dismissed after about two minutes of watching Arthur Patten - half of last year's Schools' U14 finalist pair - play and they set the early pace in their group, winning all of their matches. Arthur's partner in that schools' tournament, Cameron Lyle, was performing equally well in his group as he and OI partner Steve Bland were showing themselves to be formidable opposition. Unfortunately Cameron's unavailability on the Sunday meant that they were unable to go on and challenge for the trophy. Elsewhere in the draw, Tim Fletcher and Sam Clarke were making good progress, as were Steve Burnell and James Gray, with guest players Seb Cooley and Nick Bunyan (positively Fennian under the front wall at times) also putting their names in the frame alongside Chris Wijnberg and Chris Lavelle respectively.

The crucial phase of the Ipswich Tournament is usually the Saturday evening, where Sunday partnerships are created, some sort of draw for the quarter-finals drags itself into existence and all involved spend a quiet and sober evening over dinner in the pavilion talking tactics and getting an early night. This year was of course no exception and rumours of a 2am challenge match between the OIs (Dave Leach and Tom Fletcher) and the Rest of the World (Seb Cooley and Nick Bunyan) are surely nothing more than rumours.

Sunday morning started with an assessment of the Saturday's casualties. Alex Yusaf had spent the night in A&E after a post-dinner glass/hand incident and the walking wounded also included Joe Hunt, who had managed to break his hand during Saturday's play. As Joe himself explained, this was entirely due to a shot that he had played and had absolutely no connection to a frustration-induced wall-punching episode. The spirit of Roger Ingham lives on.

More subtle damage had been wrought on certain participants by the previous evening's port and by lunchtime the field was down to the last four. Burnell and Gray were in fine form, making short work of Dave Leach and Oscar Taylor in the first semi-final. The second semi was the match of the tournament with Tim Fletcher and Sam Clarke striking first against Bob Freeman and Arthur Patten, who then levelled at 1-1. The third was nip and tuck but in the end it was Tim and Sam who won through to the final 12-10.

The final followed a similar pattern; Tim and Sam won the first game and then Steve and James the second. The third was the turning point, however, as Tim and Sam got off to a flyer, Steve and James began to tire and despite a bit of a rally in the fourth, it was the Fletcher/Clarke combination who got their hands on the 2013 Graves Cup with a well-deserved 3-1 victory.

A Fives tournament wouldn't be a Fives tournament without Seb Cooley winning something, so with plate specialist Tony Stubbs unavailable on the Sunday this year, the good Fives players of Ipswich generously let Seb and U12 partner George Frettingham get his hands on the (imaginary) plate trophy.

The Ipswich Tournament is always a highlight of the Fives year and comes highly recommended to any Fives player who would be interested in joining us next year. Thanks as always are due to Peter Boughton for his wonderful organisation and to the School for hosting us, feeding us, watering us and accommodating us as splendidly as ever. Here's to the 2047 Tournament and the appearance that year of three generations of Boughtons and Levicks...