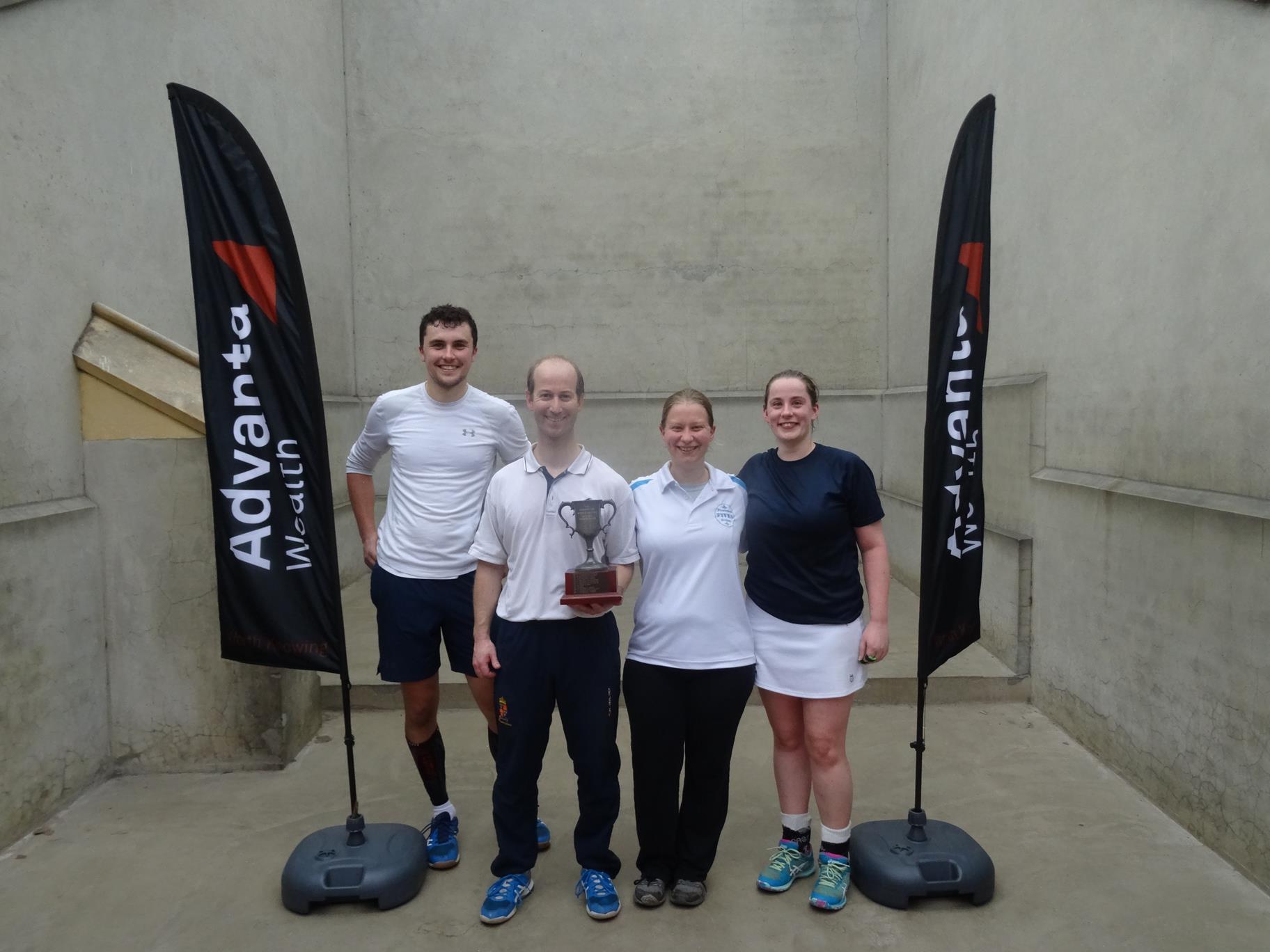 Eight In A Row For The Cooleys

08/04/19: Seb & Charlotta Cooley maintained their stranglehold on the Mixed Championships trophy with a tenth win overall and an eighth win in succession as a pair at Eton yesterday.

A strong field of 16 pairs produced a fantastic day of Fives, with the quality high and the atmosphere one of friendly enjoyment (most of the time, anyway). A prior engagement with a Kinnaird Cup semi-final meant that the defending champions sat out the group stage leaving three groups of five pairs to battle it out to produce the other seven quarter-finalists.

There were close games aplenty in the group stages but no massive shocks. There were however some notable performances, not least from Faye Kerr & Joe DaCosta, who won their first match in the competition in their third year of competing and from young Berkhamstedian Bethan Miles, who partnered coach Anthony Theodossi and came within a whisker of beating Old Westminsters Elana Osen & Riki Houlden. Karen Hird & Tony Barker and Eloise Carter & Andrew Rennie qualified in reasonably straightforward style from their group, although Eloise & Andrew were pushed hard by Francesca Turnbull & Nathan Turnbull, a performance which gave the Turnbulls the dubious honour of qualifying for the quarter-finals as the best third-placed pair, earning them a meeting with the top seeds. The other two qualifying slots were won by ladies finalists Emily Scoones and Ashley Lumbard, partnered by Jonny Ho and Hugo Young respectively, the Cholmeleians winning the battle for top slot.

Ashley & Hugo next found themselves up against Elana & Riki in a tight and tense quarter-final; the Westminster pair were always ahead but Ashley & Hugo got it back to 13-14 before an unfortunate gameball cut hit the ledge and went out. Seb & Charlotta finally deigned to put in an appearance at this point and saw off the Turnbulls with the minimum of fuss and Emily & Jonny had too much firepower for Eloise & Andrew. Bethan & Ant confirmed the good impression they had made in the morning with another good performance but were unable to get past the formidable new pairing of Karen & Tony.

Elana & Riki's run came to a shuddering halt in the semi-finals at the hands of the all-conquering Cooleys but the other semi-final was a corker, as Karen & Tony tried to prevent Emily & Jonny from reaching their first mixed final. This was mixed Fives at its best, with Jonny & Tony trading blows and Karen & Emily giving as good as they got, returning lots of cuts and offering plenty of attacking threat of their own. Karen & Tony withstood a Cholmeleian fightback to win the first 15-11, then after a lengthy blood injury delay - no prisoners taken in this match - the Ho hooter was put back in place and battle resumed, with a similar result to the first game as Karen & Tony managed to keep their own noses a) fully intact and b) just in front to win it 12-9.

And so to the final, with the usual three players and Tony Barker this year joining the long and distinguished list of players who have tried - and so far failed - to partner Karen to that elusive win over Seb & Charlotta. Sadly for Karen & Tony, this year turned out to be no different, although it is fair to say that the champions did not have it all their own way and were pushed very hard in both games. It always felt as if they were in control, though and Karen & Tony were never quite able to produce the run of three or four points in a hand - mainly thanks to some excellent cutting from Charlotta - that would have turned being competitive into being a real winning threat.

The highly coveted Dossi Dish - presented by the man himself this year - has turned into something of a Suffolk speciality (must be the Stubbs plate-winning influence rubbing off) in the last couple of years and this year didn't buck that particular  trend. Charlotte Gregory & Steve Burnell managed their group games very efficiently to engineer themselves into finshing third in their group without ever looking like winning enough points to make the quarter-finals and continued to plot their way to the final with some strong performances in their plate group, aided to a degree by an injury to Ian Mitchell, which curtailed his involvement. Beneath them, the other three pairs were all beating each other with 12-11 games galore between Ian & Mandie Barnes, Joe & Faye (recording their second win of the day) and Catherine & Robin Vos. The other group was equally competitive, with Natalie Lilienthal & Alex Abrahams and Emily O'Malley & Sanjay Kundu unlucky not to win more matches before a climax to the group that saw Rachel Wood & Matt Chinery involved in a shoot out with Natasha & Tim Gregory for the other place in the final. It looked for all the world as though Rachel & Matt had done enough as they got to 11-9 up, but they reckoned without the traditional Gregory never-say-die attitude as Tim & Natasha turned it round, with young Natasha Gregory finishing the match off with a devastating cut return/winning volley combination to ensure another Suffolk win and indeed a Gregory family win as the two sisters faced up to each other. As you might expect, there was no quarter asked or given from either side in the final but it was the older sister Charlotte who came out on top as she and Steve Burnell got their hands on the Dossi Dish 15-10.

The other plate finals also produced some of the best matches of the day; Nathan Turnbull stood in for the crocked Ian Mitchell in the Plate B final, which he and Mandie lost 11-12 to Rachel & Matt. The Vos father and daughter duo edged another 12-11 game against Emily & Sanjay and Natalie & Alex saved their best for last, gaining refenge for their morning defeat at the hands of Faye & Joe.

I am pleased to report that the remainder of the tournament ran just as smoothly and took place in the Henry and then the Golden Curry.

Thanks go to Advanta Wealth for their sponsorship, to Eton for hosting the tournament and to everyone who played and made it such an enjoyable occasion.

Plate A for the Dossi Dish