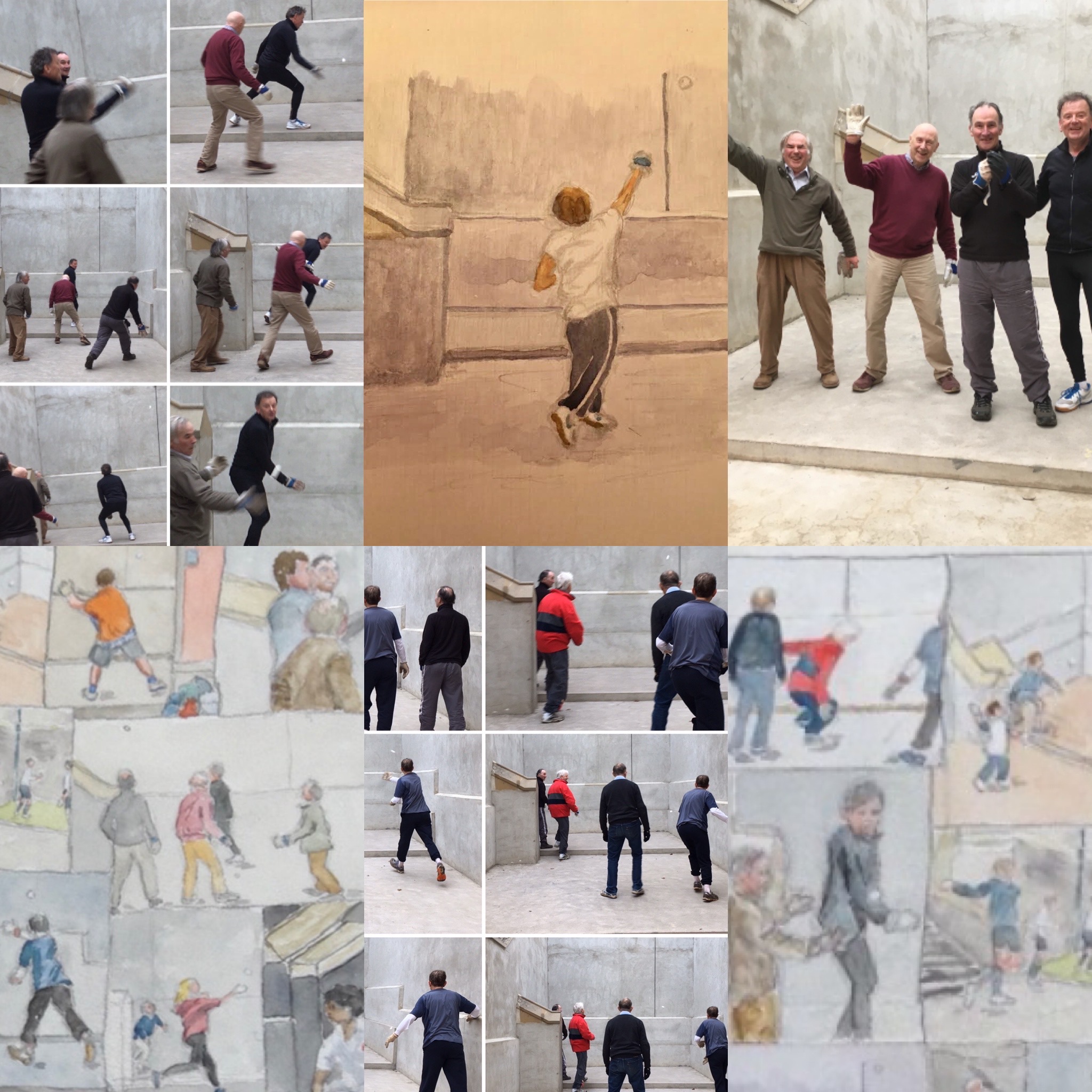 24/08/20: Bunch of Fives makes the bold claim to be the UK’s newest and at the same time oldest Fives club.

We will now hide behind the buttress while scorn is hurled by octogenarians, nonagenarians and these days, possibly even centenarians. No matter, the key thing is that we are also very enthusiastic, as happens with so many ‘born-again’ practitioners of anything from religion to knitting.

In normal times we meet weekly at the pair of Eton Fives courts in Oxford University’s sports centre on Iffley Road. We are the garrulous ones in the café, checking that everyone one under 50 knows who Roger Bannister was and why the walls are decorated with the numbers 3.59.4. Before lockdown, we had just reached a total of 14 players from four Fives traditions – Eton, Rugby, Winchester and First Time I’ve Heard Of It. New recruits of any age and level are very warmly welcome – and It is brilliant, at exactly the time of writing, to get Gareth’s news of the long-awaited permission to resume play.

Club membership is free and gets you a weekly email including a Fives Fact, many culled from the rich stock of history and lore on the EFA website. We even discovered what we believe to be a new fact previously unknown to the EFA, about Pliny the Elder having the Roman equivalent of a Fives court at his villa near Vesuvius. This was encouraging because he was both an Elder and somewhat slow-moving (‘portly’ is the word used by the historian Dr Daisy Dunn who provided the info). So – with some lithe and nimble exceptions especially among our women players - we feel a bond.

The Bunch began last Summer when two of us were watching contemporaries at the annual Rusty Rackets tennis gala at Summertown’s magnificent public grass courts, and somehow the subject turned to Fives. Neither of us had played since school but we’d enjoyed it then; he because he was good at it; I because it was the easiest way to chalk up the requisite number of hours-per-week ‘doing’ sport – and unexpectedly fun.

Eavesdropping Racketeers took an interest and half-a-dozen of us were given a great boost by the hospitality of the North Oxford club at Summer Fields school. No one reading this needs to be told about Gareth’s generous spirit, and his patient coaxing of our fumbling return to the game was shared by all the club members. Thank you warmly again!

We also owe sincere thanks to the staff at Iffley Road who greeted tentative inquiries about pensioners using the Fives courts with the observation that it was “a very unusual request”. So it proved; the Westway Revolution has yet to reach Oxford in terms of widespread public use and we never have problems getting a court. We always check with the university club, though, after coinciding once with an Eton match. Awestruck, we watched a completely different game from our own.

The Sports Centre is very keen to promote community use and their terms for an OAP Community Member are generous indeed. We would be delighted to welcome anyone interested – please This email address is being protected from spambots. You need JavaScript enabled to view it.. Once in action again, probably next year, we may even issue and accept challenges for a match with other clubs or players. Provided we learn how to score.